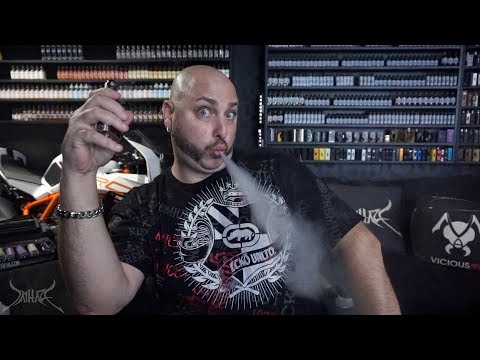 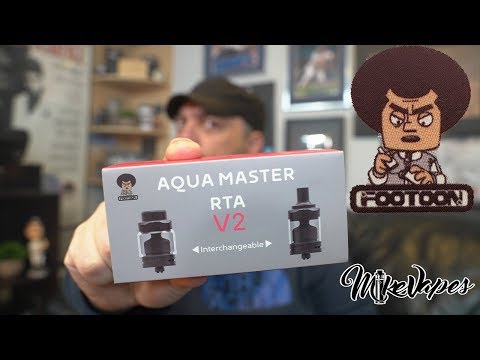 Footoon presents the Aqua Master 24mm RTA V2, a rebuildable tank with options to be used in Direct Lung configuration or Mouth to Lung configuration. This beautifully crafted RTA caters to all users with its single coil build deck and unique adjustable airflow system.

Footoon presents the Aqua Master 24mm RTA V2, a rebuildable tank with options to be used in Direct Lung configuration or Mouth to Lung configuration. This beautifully crafted RTA caters to all users with its single coil build deck and unique adjustable airflow system. The Aqua Master V2 is constructed from stainless steel with a 2ml Pyrex glass tank section and an optional 4.5ml Pyrex glass bubble tank section.

At the core of the Aqua Master RTA V2 is a very unique two post, single coil build deck. The unique feature of this build deck is the three airflow channels, controlled by a single airflow control ring, which can be set up for MTL or DL style of vaping depending on which setting the AFC is on. The first setting on the AFC is fully closed and all three airflow channels will remain closed to help prevent any leaking when not in use. The second AFC setting opens two 1mm air holes positioned beneath the coil, with the other two airflow channels remaining closed,  for MTL style of vaping. This setting paired with 0.8 to 1.2 ohm coil allows the Aqua Master V2 to work at a lower wattage range in conjunction with Salt Nic E-Liquid. The third AFC setting opens an oblong 7mm by 2mm bottom air hole positioned at the front of the coil for a more restricted DL style of vaping. The fourth AFC setting is wide open and opens the two airflow channels from the previous settings, as well as a third 3mm air hole positioned behind the coil for builds requiring maximum airflow. Each of these setting can be fine tuned to the user’s preference by setting the AFC between each settings tick mark, located on the AFC.

Footoon designed the Aqua Master RTA V2 to be versatile and allow the user to choose which style of vaping to use it for. When used in MTL mode it is recommended to use the included 5mm bore delrin drip tip, the 2ml tank section, a higher ohm coil, and the first AFC setting. For DL mode one would use the included 8mm bore resin drip tip, the larger 4.5ml tank section, a sub-ohm coil (Footoon recommends fused clapton coil), and the third or fourth AFC setting. The Aqua Master RTA V2 is available in Black, SS, Blue, and Sand Blasted SS.

Check out the Footoon Aqua Master RTA V2 infographic to help you better understand how it works!