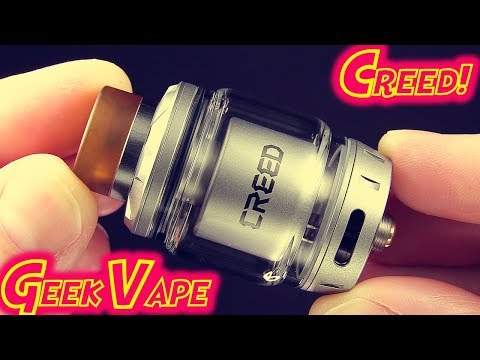 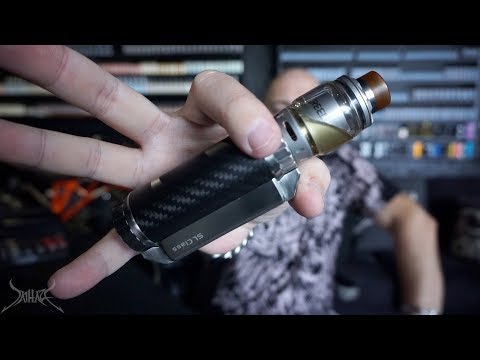 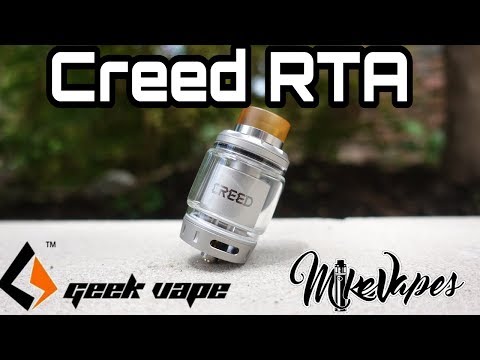 The GeekVape presents the Creed 25mm RTA with a unique interchangeable internal chambers that drastically modify airflow of the RTA. This package comes with three different chambers: one solid chamber, one vertical grill slotted chamber

The GeekVape presents the Creed 25mm RTA with a unique interchangeable internal chambers that drastically modify airflow of the RTA. This package comes with three different chambers: one solid chamber, one vertical grill slotted chamber, and one rounded grill patterned chamber. The solid chamber is designed to be a standard tighter draw than the other options. The vertical grill air slot are 1mm wide and are 3mm, 4mm, and 6mm tall, arranged with the tallest in the center. The round grill air ports have eight 2mm air ports per side. Each interchangeable chamber is designed in order to align the air ports directly to the coils. Airflow is adjusted with a knurled bottom ring that has dual 10mm by 3mm air slots. The Creed comes pre-installed with a 6.5ml bubble glass and has a replacement 4.5ml standard glass. This RTA features a threaded top fill cap with two wide juice ports. The Creed RTA is capable of single or dual coil builds and has two posts with one 3mm terminal per each with top mounted Flathead screws. The build deck has two large 9mm by 3mm wicking ports. The Geekvape Creed RTA is packaged with three drip tips: one 14mm tapered bore ULTEM drip tip, one 11mm standard bore frosted 810 drip tip, and one 12mm tapered bore Delrin 810 drip tip. The Creed RTA has a stainless steel and glass construction and has a gold plated 510 connection. The Geekvape Creed 25mm RTA is an excellent high capacity RTA with a versatile airflow that’s great for users looking for tank that lasts all day.