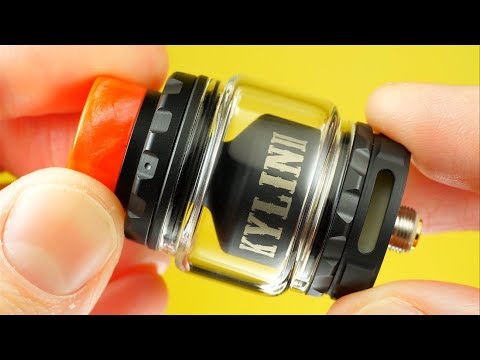 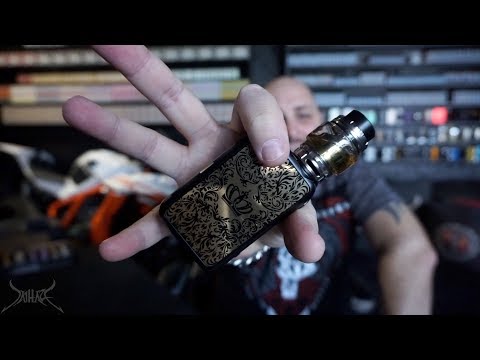 Vandy Vape Kylin V2 is the combination of the Kylin and Kylin Mini rebuildable tank atomizer with a modified build deck style with increased air flow and new adjustable juice flow. The threaded top cap has been replaced to a slide to open top fill design with 3ml and 5ml e juice capacity.

Vandy Vape Kylin V2 is the combination of the Kylin and Kylin Mini rebuildable tank atomizer with a modified build deck style with increased air flow and new adjustable juice flow. The threaded top cap has been replaced to a slide to open top fill design with 3ml and 5ml e juice capacity. The upgraded build deck is a curved post-less quad terminal with increased airflow and angled terminal slots. The dual adjustable airflow slots lead to a beveled air flow system. The Kylin V2 is a modernized version of the original based on the Kylin Mini.
The Vandy Vape Kylin V2 has a base diameter of 24mm and is 30mm at its widest point with the bubble glass section installed. The new top cap has a 11mm by 5mm juice fill port that leads to a 3ml standard glass capacity and 5ml bubbled glass capacity. The curved post-less, quad terminal build deck has four diagonally mounted hex screws that accommodate 2mm by 1.75mm terminal size. The base of the build deck features overall increased airflow through six 4mm by 1.5mm cutouts and eight centered 1mm air holes. The internal wicking port measures at a rounded 8mm by 3.5mm while the external wicking ports measures at 8mm by 2mm. The juice flow can be adjusted by threading the domed internal chamber. The dual adjustable 12mm by 2.5mm airflow leads into an internal beveled chamber. The Kylin V2 has a 24K gold plated Flathead contact point with the 510 threaded connection. This RTA comes with a 13mm Wide 810 Short Delrin drip tip and a 12mm Wide 810 Tapered Resin drip tip. Vandy Vape has included a coil lead guide and a pair of triple fused Claptons (28ga*3+38g) with an atomizer resistance of 0.41 ohm and 3mm ID. The Vandy Vape Kylin V2 24mm RTA is a successful culmination of the design improvements made through the years in one high quality package.

Product intro
With all things considered, the Kylin V2 is a solid RTA. It’s well constructed and comes with all the extra bells and whistles like a coil-cutting tool, a cool resin drip tip and some nice fused Claptons. I wouldn’t recommend it to a beginner vaper because of the wicking situation, but I would to the more experienced builders and flavor chasers. You might not nail it down right away, but when you do, it’s flavor for days! If you already own the original Kylin RTA, this may just be the upgrade you’ve been waiting for. The V2 has a more modern look and comes with improved performance. It’s a nice overall value, especially considering the price. If you’re looking for a low-profile rebuildable tank with awesome flavor, and you have some experience with wicking RTAs, then you are going to appreciate this tank. What do you think about the Vandy Vape Kylin V2 RTA? Share your thoughts in the comment section below.
0
PROS
CONS