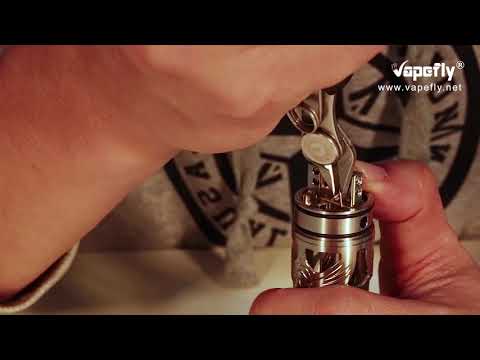 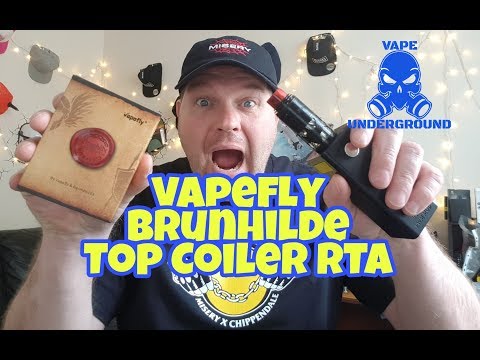 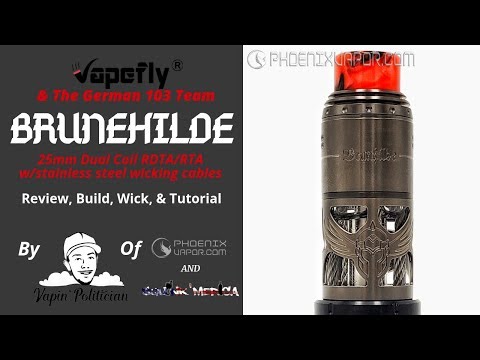 Due to the nature of manufacturing and design, each Vapefly x German 103 Brunhilde Top Coiler RTA drip tip colors come in random. Photos are for reference only and are not representative of the variances of each unit. Each unit will be sent out as packaged and at random.

Vapefly and German 103 work together to bring the Brunhilde Top Coiler to life. The Brunhilde RTA is an amazing double coil rebuildable tank atomizer with adjustable top airflow, a whopping 8ml juice reservoir, and german stainless steel wire for continuous saturation. The Brunhilde has a unique internal chamber within the build deck to provide amazing airflow.

The Brunhilde comes pre-installed with four German steel wires inside the reservoir allowing the cotton to saturate through the 8ml of E-liquid it holds. The Stainless Steel wires ensures that users will use every single drop that the Brunhilde holds. The build deck of this RTA has a single post, four terminal design that is intended to fit a dual coils. Each terminal is 3mm by 3mm and is secured by side mounted hex screws. The build deck features a raised wall with air slots in order to create delicious flavor with each hit. The walls have six 0.5mm wide air slots that direct airflow below the build deck. Externally the top cap of the Brunhilde acts as the airflow control ring, allowing users to adjust their airflow through fully open, closed, or halfway through. Located between the airflow, closer to the tank, is the easy access fillport. The fill port is marked with three drop emblems for a more visual aid. The body of the Brunhilde consist of Stainless Steel, Pyrex glass, and a 24K gold plated contact.  Packaged along the Brunhilde are a pair of firebolt cotton cottonand a pair of pre-built 0.35 ohm coils (26ga*2(KA1) 36ga(Ni80) framed coils. The Brunhilde by Vapefly has a 9mm wide 810 bore drip tip that comes in a unique resin color, along with a 510 drip tip adapter. The Brunhilde 25.20mm RTA is a minimalist, yet gorgeous RTA that is made to provide amazing performance in an extremely convenient package.